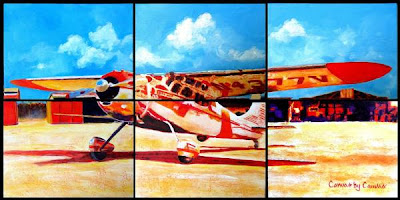 became aware of the Wendell Eckert story because of one of our members, Maryann, and some of her many friends. In fact she knows just about anyone ever mentioned in our conversations, and many times we’ve heard her begin a story or interject into one of ours “They Used To Live In My Neighborhood” and we’ve abbreviated it to “Oh, it’s just one of Maryann’s TUTLIMN’s.”

So Wendell Eckert is known to us by way of a Maryann TUTLIMN. His daughter, Gretchen, gave Maryann a photo of his vintage Cessna 195, built in 1949, as a basis of our painting. The call numbers of the plane were 77 Victor and can be seen on the wing and the numbers are unique to that individual plane. It is the call number the towers use to direct the plane for landing or other orders.
The plane was built in 1949 and was used by Wendell as the lead plane for the US Forest service primarily in the Sequoia forest. His job was to strategically lead the bombers into the forest to drop the fire retardant. The US Forest Service referred to Wendell as the “Voice of the Sequoias” since he was the lead plane for forest fires for thirty years.

An admirer of Wendell, William (Tim) McMaster has a video of one of his flights on YouTube and he’s seen taking a beautiful bride for a celebratory flight. Wendell was 79 years old in this clip and he began flying in college in and flew until the age of 82 in , flying over 24,000 hours in his career. He died at age 91. He was born in 1916 in . Wendell’s house and the airport can be seen at the beginning of the clip in black and white and the photo was taken right after the war. When the war came, he was chosen to join the Army Air Corp in and serve as flight instructor to countless cadets preparing for battle.

Mr. McMaster told Gretchen he put the video on YouTube with hopes she might enjoy it someday. He said “We loved your Dad very much”. The Cessna 195 is unique as it is a radial engine tail dragger and few of the planes have survived the years because the planes are very temperamental and require very experienced pilots.

Watch the video to see Wendell with the Cessna 195 and enjoy some good music with the ride.

Gretchen and ZoAnn and Tim thank you for providing the information so that CBC could enjoy painting this work and getting to know your story.
Posted by Nancy Standlee at 12:42 PM No comments:

CanvasbyCanvas.com The eight members of Canvas by Canvas met because of their passion for painting. They created CBC because of their friendship and their love of painting. Most people think one painting equals one artist, but not in the work of Canvas by Canvas. Each painting includes several squares or rectangles and each one is painted by a different CBC artist in their own individual style. Each member contributes their time and energy for a collaborative painting that is unique, colorful, and contemporary. The paintings are approximately 30” square but CBC works in all sizes and styles and welcomes commissions and visits to our website.